Like some of you I am with the Wessex 4x4R group and I was in Muchelney last week helping the locals as best I could with transport. Wednesday was not too bad with the road from Thorney to Muchelney  about 500mm deep. I did this perhaps 30+ times in the day ferrying people, milk, bread, dogs etc between the villages. On Friday the water was up to nearer 600mm which is just below the door seal on my Defender 90 but with a snorkel I decided there would not be any catastrophic engine failure. Two small stories though:

1) One farmer I knew from Wednesday, and who has a Series 3, said he would not be in that much water. When  farmer says it is “too deep” it is time to get the hint.

2) I asked the fire service guys from Suffolk if they would recce a lane for me and their answer, after talking with their control, was:- “our Unimog is only good for 1m and that lane is likely to be deeper so we can’t go there. When a Unimog driver says it is “too deep” I definitely decided not to attempt it! 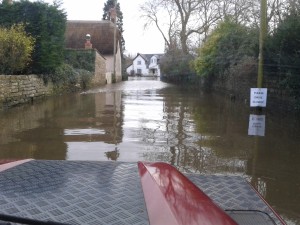 One thought on “Deep in Somerset”